‘Let’s talk loneliness.’ That’s the challenge of this year’s ‘Loneliness Awareness Week’. When I was alerted to it at the end of last week, I felt it was something that our online ‘Connecting People’ groups would rise to. I felt it was a priority to make the time to hear what they had to say. After all, ‘connecting people and encouraging community’ is what we’re about at Tap into IT – providing people with a way to deal with loneliness.  So with almost no notice, I’ve dropped in on 5 of the groups so far with 2 to go tomorrow to see if they’re up for ‘talking loneliness’. They certainly are!  So much so that I’m going to have to ‘serialise’ to give you an idea of their experiences and insights.

First off, what is loneliness and why do we get lonely?  The Pandemic experience has really highlighted to many of us that people really do need other people.  “We’re social animals and like having others around” as one group member put it.  Others mentioned how we can feel lonely if we don’t have a person or persons who we connect with in some way, e.g. through similar interests.  People who know us, accept us, who we can talk to.  One person commented that we can feel lonely in a crowd if we don’t feel on the same ‘wavelength’ as others.

When and how do we get lonely?  People mentioned sudden changes. Through losing a partner, a job, through an accident … or a Pandemic!

“I used to belong to several clubs and found that they were very helpful to get out to chat to people. That was quite enough to keep me from being lonely. But they’ve all disappeared.. all shut down. There was one down at Craigmillar church that I went to and another at Marchmont church that I found quite useful too. There was also a Mens’ Club at Craigmillar Park Church which was once a week during the winter time. These were all helpful things quite. apart from attempting to keep up with relatives. I found people on the same wavelength as myself and became quite friendly with them. … The Covid situation has whittled it right down.”

Others had similar experiences.”… all the things I was used to doing … Pilates, going for coffee with friends, holidays .. disappeared all of a sudden.”

“…I don’t see as much of my daughter now (-that’s she’s working from home in Livingston rather than working in Edinburgh). She has come in occasionally. I do miss her.”

What has struck me this last year is that what we’ve all experienced up to a point is what a lot of people experience much of the time, Pandemic or none.  Finding themselves alone through a change in circumstance like loss of a partner or job or coping with a health problem or disability that means they are housebound or restricted in what they can do.

Next time: What impact does loneliness have on people? How have they responded to it? 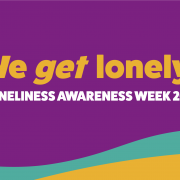 What helps people to manage loneliness?

“We get lonely but we don’t all get loneliness.”
Scroll to top